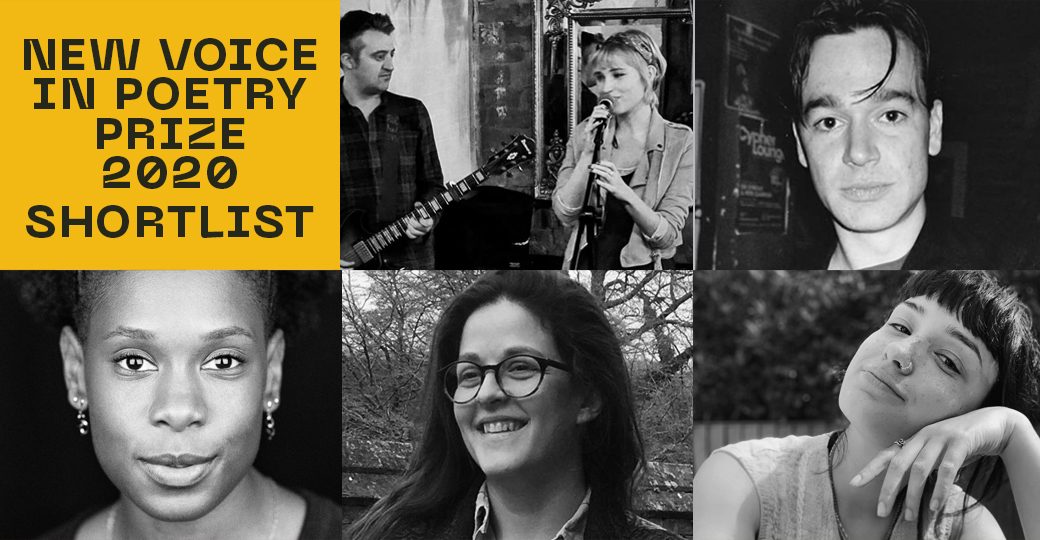 We are delighted to announce the New Voice in Poetry Prize 2020 shortlist!

After launching the prize at the beginning of May, we received a staggering 390 submissions and nearly 800 recorded audio poems! We have been absolutely blown away by the sheer scope and quality of the applications we have received and would like to thank everyone who entered the competition for taking the time to write, record and upload your poems.

Last week, our fantastic panel of judges (Tom Chivers, Jade Cuttle and Ross Sutherland) met up via Zoom, to decide on a shortlist of 5 Poets. After hours of listening and heated deliberation, they were able to come to a unanimous decision…

The New Voice in Poetry Prize 2020 shortlisted poets are:

The winner of the New Voice in Poetry Prize 2020 will be announced on Tuesday 23rd June.

Emily Rose was the first female Staffordshire Poet Laureate (2017-19), and is co-founder of Spoken Word night WordCraft and current Poet in Residence for Lichfield Library. She performs regularly across the UK and has work featured in publications from Popshot Magazine, Dream Well Writing and Black Pear Press, as well as becoming one of The National Trust’s commissioned poets for the 2019 People’s Landscape Project, and curating a line-up for the POW poetry feature with BBC Radio Stoke in 2020.

In March 2019, Emily teamed up with singer-songwriter John MacLeod, who, as well as his own forays in to writing, is well known for both his solo work and performances with groups The John MacLeod Band and Attack of The Vapours. Following a performance on King Street Studio’s livestreamed show ‘The Honey Box’, the music and poetry duo Rose&Cloud was born. Together the pair have since toured across the Midlands and recorded two EPs, showcasing their unique blend of guitar soundscapes and intimate vocals, which frequently tackle resonant subjects such as mental health, personal growth and the complications of human relationships.

‘Emily Rose Galvin’s complex, restrained poems are delivered with real skill and clarity of purpose. They are full of beautiful, memorable images that drew us in, and are complemented by haunting guitar work. Her poem ‘For You, My Lady Greensleeves’ was particularly affecting – a response to lockdown that feels fresh and timeless at the same time.’

Edward Green is a writer and musician from Liverpool, living and working in London. He is the co-founder of Toothgrinder Press and plays in the band Legss. His work deals with monotony, social cliché and the slow cancellation of the future.

‘In these bold and innovative poems, sound and voice are always in step, combining thrillingly to tell stories that impressed us with their dark humour, unique turns of phrase and emotional vulnerability. Green is an original, quite unlike anyone else.’

Safiya Kamaria Kinshasa is a British born Barbadian raised poet and dancer. She is a recipient of the Jerwood Arts | Apples & Snakes Poetry in Performance Programme. Her work has been published in a range of journals and anthologies including: The Caribbean Writer, The Amistad, and Alter Egos (Bad Betty Press). She was shortlisted for the 2020 Outspoken Page Poetry Prize and longlisted for the Performance and Film Categories. In 2019 she won the BBC Edinburgh Fringe Slam Championships, the UK Nationals and became a BBC Word’s First finalist.

‘Safiya Kamaria Kinshasa’s poems are bursting with language. They capture the chaos of lived experience with power and originality. Everything in the worlds she conjures seems to be falling apart, but this heady, Technicolor mix is held together by precisely controlled image-making and a gripping delivery. Compelling, experimental, passionate – we were blown away.’

‘April’ and ‘May’ by Louise Morrisson were made in collaboration with sound designer Oliver Morris. Since meeting, the two have shared their own creations and come together in a joint effort to create a new sound scape. Mixing together the vivid imagery that Louise draws from her personal history and perceptive to perform them with an intent to inspire a visceral emotional reaction.

Louise has contributed to the podcast “{benchtimes}”, a series of transcendental conversations that evoke a feeling both alien and intimate.

‘These are unnerving, playful experiments in hauntology – muffled voices, sound design and text in synthesis, creating doorways into a strange, interior world. Louise Morrisson’s work is technically accomplished and grounded in the materiality of sound. We were charmed and unsettled in equal measure.’

Millie Norman is a 20 year old spoken word poet and flash fiction writer. She is a bookseller and blog editor for international creative collective !GWAK. The poems submitted, ‘Leo’ and ‘Chakra’ are two character-based prose pieces. ‘Leo’ is part of a series of poems written on male mental health, and follows a young man navigating his depression. ‘Chakra’ is based on a character created from different entries in an automatic writing journal. She is made from all of the people and situations I encountered and recorded, with the intention of highlighting the ways in which we are all connected.

‘To hear Millie Norman read is to immerse yourself in a cascade of startling imagery and sudden turns. Her poems are sophisticated and richly realised character studies, delivered with impressive control. This is subtle and original work that tells powerful stories with linguistic poise and emotional depth.’